by Sarah Whitmire and Joe Burke

Snow is falling on a frigid Wednesday at 5:00 AM, and many students are impatiently awaiting the fateful notification that school has been cancelled. To most, it seems that this call is made easily and quickly when snow is covering the area. However, by the time you roll out of bed and see the falling snow, Dr. Dennis Riker, superintendent of Nazareth Area School District, is already wide awake and hard at work.

Dr. Riker has been making the final decisions for two hour delays and snow days for fifteen years. His process has changed greatly with technology, and only wishes that new technology would make inclement weather easier to predict reliably!

As soon as inclement weather is forecasted, Dr. Riker transforms into a self-proclaimed “weatherbug” and is actively watching the forecasts from multiple weather sources.

“Most times, if not all times, I make the decision from home,” he said. He uses his TV, computer, and phone—a setup he calls his “command center”—as multiple sources of live information. He watches the forecast carefully, talks with representatives from Jennings Transportation and administrators of other school districts, and views security camera footage to look at live weather conditions at each of the district's buildings. After making a decision, he starts a group chat with other personnel who will communicate the decision to the students and community. He also noted that his dog is at his side every time during the process.

He admits that the decision is a complex one with "lots of moving parts," including road and sidewalk conditions, building preparations, rapidly changing temperature and precipitation types, as well as considering the safety of inexperienced high school student drivers and the fact that many faculty live further away.

Not only does he have those in Nazareth to help him decide, but he often considers what neighboring districts- such as Easton and Northampton- will do too. His communications with other superintendents and districts in both Lehigh and Northampton counties allow him to gain information and have second opinions to assist his decision.

When making the decision, he has to factor in students who walk, drive, and take the bus. The buses, which need a three-hour window to complete their routes and return to the depot, are known for poor performance in snowy and icy weather. Riker explains that his "least favorite forecasts" are ones for ice because they make his decision particularly difficult for walkers, drivers, and bus riders.

He also has to account for weather differences in different regions of the school district. If one area has not been affected by the bad weather, but another has, he makes sure to put that into consideration. Riker recalled an incident a few years ago when Bushkill Township ran out of salt and he had no choice but to close the entire district; in that case, the Bushkill road conditions not only affected students at Butz Elementary, but also students from NAIS, NAMS, and NAHS from that area of the district.

For Dr. Riker, the decision is based most heavily on concerns about student safety. He recalled a past incident in a different district: some students had not been informed of the delay, which resulted in them waiting at the bus stop in freezing temperatures. To avoid this, he puts all his thoughts and considerations in before making any call about school, sometimes being sure to warn families to check back for updates in case the situation changes from a delay to a close.

He says, “[The safety of the students] is all on my shoulders.”

Most would assume that having the pressure of making a big decision would be the most difficult part of it all, but Dr. Riker said that the hardest part is knowing that "no matter what we do, someone will not be happy about it."

However, he is quick to point out that he'd rather field phone calls from people about an unnecessary closing, rather than risk putting a single student's safety in jeopardy by deciding to remain open in bad weather. He firmly believes that most days he makes the right call.

For years, kids from Nazareth have woken up to snow with the immediate wonder of whether or not school will be cancelled. The process tends to stay under wraps, with few people really knowing the complexity and the delicacy that faces Dr. Riker every time those flurries begin to come down. Nonetheless, we can rest easier knowing that this process is in the hands of someone who can handle it.

Posted by News From the Nest at 9:04 AM No comments:
Labels: FEATURES, Snow Day, Superintendent

The Center for Humanistic Change came to Nazareth Area High School on Tuesday, February 6 to spread awareness about the dangers of addictive drugs, particularly regarding teenagers. The CHC’s social movement is referred to as HOPE, short for Heroin and Opioid Prevention Education. The lecture was presented by Kim Moyer, a Senior Prevention Specialist at the CHC. Since 1979, the center has been raising awareness publicly to schools, offices, and conventions.
Although drug abuse is a terrifying topic, the purpose of the presentation is to promote change, not to scare. Since the 1990s, opioid misuse, whether it be vicodin, oxycodone, or marijuana, has been on the rise. In fact, every nineteen minutes someone dies from overdose. Pennsylvania has the sixth highest overdose rate in the country, with thirteen lives taken every day.
Many times, friends and family of an addict ask why they are not able to just stop. An addict cannot just simply stop because it is an embedded habit, an intense craving, not a lack of willpower.
Another common question is why so many refer to drugs as an answer. Issues from mental illnesses, such as depression and anxiety, to medicine prescribed by doctors can lead to a life-altering addiction. Surprisingly, genetics may also play a role in addiction. If there is a history of drug abuse in one’s family, they are more susceptible to addiction. To add to the crisis, drugs have become so readily accessible to the public. Especially in younger crowds, drugs have become normalized in a way that increases the number of users substantially.
Behavioral signs of an addict include a new group of friends, isolation from family, and grade decline. Indication of withdrawal, or the “hangover” of drugs, includes flu or flu-like symptoms, such as chills, sweating, pain, hallucinations, and nausea. Lastly, suggestions of an overdose entail blue fingers or lips, gurgling sounds indicating that the main airways are blocked, vomiting, convulsions, and clammy skin.
The assembly presenters stressed that If you encounter someone in an overdose state, roll them on their side to prevent choking, call 911, stay with them, perform CPR if able, administer Narcan if available, and be completely honest with the first response team. There are no consequences for being found near the drugs or with those who abused them if these steps are followed.
The presentations of drug addiction from the Center for Humanistic Change, as well as other organizations, have allowed for public awareness and a drastic decrease in addictive drug users. In the future, the CHC’s goal is to help more people who are suffering from addiction and work to end addiction by treating mental disorders with therapy rather than through medication, diminishing over-the-counter accessibility, and introducing the conversation of drug dangers to a larger audience. Kim Moyer, member of the CHC, says her favorite part of her job is “meeting real people and knowing that [she’s] helped.”
If there is anyone who is dealing with an addiction, they can contact the Lehigh County Addiction Treatment Center at (610)-782-3555 or the Northampton County Addiction Treatment Center at (610)-829-4725.

Posted by News From the Nest at 2:57 PM No comments:
Labels: Assembly, HOPE, NEWS


One hundred and sixty one @NazNestNews Twitter followers voted for Ms. Ochse as the teacher you'd like to learn more about first. Here's what she had to say! 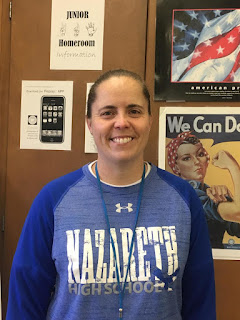 1. Which time period would you choose to be a teenager in? Why?

I was a teenager in the 1990s and had a great experience. Title IX had been established for years, so my gender would not hold me back from all the education and athletic opportunities I was able to enjoy. Also, in the 90s, when we went to school and hung out with friends, we weren’t glued to our phones. I think we developed better relationships and were more focused on enjoying the moment. We didn’t have to waste time creating a cool online presence or worry about how many likes we would get.

2. What’s your favorite thing to eat for breakfast? Be specific!

3. If you could do something with one dead person from history, what would you do and who would you do it with?

I’ve always admired those who campaign to bring about social change. I would want to experience getting arrested with Alice Paul and Lucy Burns while fighting for a constitutional amendment to give women the right to vote.

4. What was your favorite thing about high school?

I loved game day! I received varsity letters in four sports while in high school. I loved to compete and cherish the bonds that I created with my teammates. Many of my high school teammates are still my closest friends today.

5. What is one place you want to visit in your lifetime and why?

6. Who do you think is going to win the Super Bowl?

I will be rooting for the Eagles to win. Philly needs a championship!

7. If you had a movie about your life, what genre would it be, and who would star in it as you?
A documentary starring me. It’s probably a show that only my mother would love.

We asked NAHS students about their Superbowl plans and expectations.

In our very unscientific poll of 21 students, a sixty-seven percent majority said they plan to hang out with family and friends; nineteen percent are excited for the food; and fourteen percent do not plan to watch.


"I am going to go to a party and eat a bunch of food and watch the commercials and halftime show, but not the actual game."

"I plan on heading to Philadelphia and eating at Chickie's and Pete`s with my brother while watching the game."


"I’ll be watching Netflix but eating all the SuperBowl food." 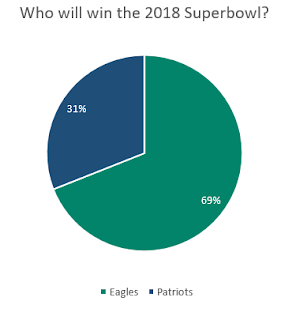 We also asked our respondents who they think will win.

Many NAHS students have their expectations set on the local team!

Got another great answer to this question? Comment below!
Posted by News From the Nest at 2:42 PM No comments:
Labels: STUDENT VOICES, Superbowl
Newer Posts Older Posts Home
Subscribe to: Posts (Atom)