by Sydney Daly and Adrianna Wagner


It’s that time of year again! Horror films are cast into theaters, Halloween candy hits the shelves, and people begin to anticipate spine-tingling amusement. Fortunately, for those in the Halloween spirit, there is a community event hosted by the Nazareth Football Boosters taking place at Tuskes Park on October 19th from 6:30 PM to 9:30 PM. The Haunt has become a yearly event. The event coordinator, Mr. Rod Wilson, said “It’s been very good in the past. Last year, we drew 400 kids--so it’s popular.” Cost is $5 for one lap around the track and $10 for unlimited laps, where visitors can enjoy frightening attractions put on by an assortment of Nazareth’s sports teams and high school theatre classes. Attractions will include a Voodoo Swamp constructed by the softball team, an Undead Hall of Famer theme by the baseball team, a petrifying scene drawing inspiration from classic slasher films performed by our theatre troupe, and an eerie circus assembled by the cheer team. Throughout the night, patrons can vote for their favorite attraction giving each group the opportunity to win a prize. Mr. Wilson also has high hopes for the future of the activity: “This is turning into a community event. That is directly where we want it to go. We’re hoping to get this somewhere on the school grounds next year and add in many of the other booster clubs because this could easily become a Nazareth tradition. It’s a lot of fun, and it brings the community together.” 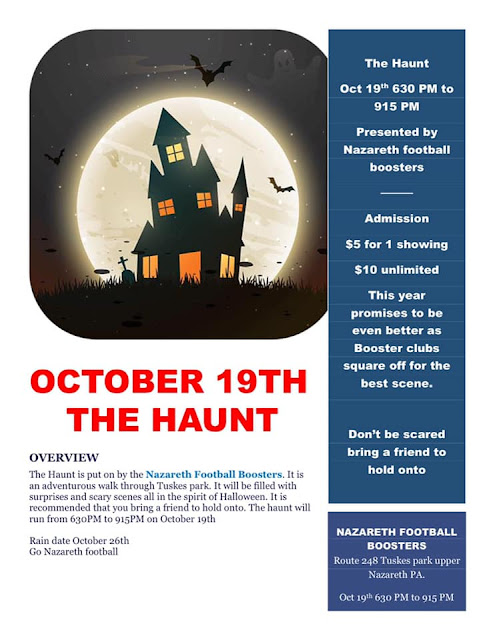 News From the Nest editorial staff will check all comments for appropriateness before posting.